How is the state produced? In what ways did enslaved African Americans shape modern governing practices? Ryan A. Quintana provocatively answers these questions by focusing on the everyday production of South Carolina's state space—its roads and canals, borders and boundaries, public buildings and military fortifications. Beginning in the early eighteenth century and moving through the post–War of 1812 internal improvements boom, Quintana highlights the surprising ways enslaved men and women sat at the center of South Carolina's earliest political development, materially producing the state's infrastructure and early governing practices, while also challenging and reshaping both through their day-to-day movements, from the mundane to the rebellious. Focusing on slaves' lives and labors, Quintana illuminates how black South Carolinians not only created the early state but also established their own extralegal economic sites, social and cultural havens, and independent communities along South Carolina's roads, rivers, and canals.

Combining social history, the study of American politics, and critical geography, Quintana reframes our ideas of early American political development, illuminates the material production of space, and reveals the central role of slaves' daily movements (for their owners and themselves) to the development of the modern state. 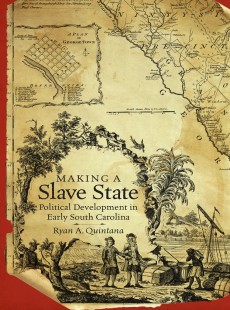