The 1850 Fugitive Slave Law, which mandated action to aid in the recovery of runaway slaves and denied fugitives legal rights if they were apprehended, quickly became a focal point in the debate over the future of slavery and the nature of the union. In Making Freedom, R. J. M. Blackett uses the experiences of escaped slaves and those who aided them to explore the inner workings of the Underground Railroad and the enforcement of the Fugitive Slave Law, while shedding light on the political effects of slave escape in southern states, border states, and the North.
Blackett highlights the lives of those who escaped, the impact of the fugitive slave cases, and the extent to which slaves planning to escape were aided by free blacks, fellow slaves, and outsiders who went south to entice them to escape. Using these stories of particular individuals, moments, and communities, Blackett shows how slave flight shaped national politics as the South witnessed slavery beginning to collapse and the North experienced a threat to its freedom. 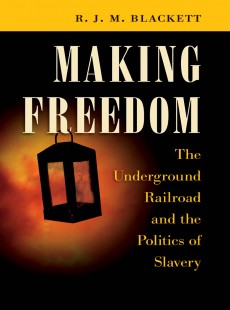 The Underground Railroad and the Politics of Slavery