Farm women of the twentieth-century South have been portrayed as oppressed, worn out, and isolated. Lu Ann Jones tells quite a different story in Mama Learned Us to Work. Building upon evocative oral histories, she encourages us to understand these women as consumers, producers, and agents of economic and cultural change.

As consumers, farm women bargained with peddlers at their backdoors. A key business for many farm women was the "butter and egg trade--small-scale dairying and raising chickens. Their earnings provided a crucial margin of economic safety for many families during the 1920s and 1930s and offered women some independence from their men folks. These innovative women showed that poultry production paid off and laid the foundation for the agribusiness poultry industry that emerged after World War II. Jones also examines the relationships between farm women and home demonstration agents and the effect of government-sponsored rural reform. She discusses the professional culture that developed among white agents as they reconciled new and old ideas about women's roles and shows that black agents, despite prejudice, linked their clients to valuable government resources and gave new meanings to traditions of self-help, mutual aid, and racial uplift. 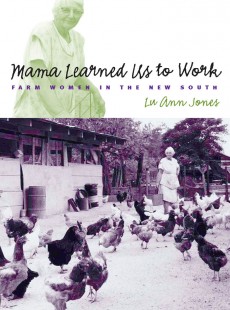 Mama Learned Us to Work

Farm Women in the New South