Historians have long treated the patriotic anthems of the American Civil War as colorful, if largely insignificant, side notes. Beneath the surface of these songs, however, is a complex story. "Maryland, My Maryland" was one of the most popular Confederate songs during the American Civil War, yet its story is full of ironies that draw attention to the often painful and contradictory actions and beliefs that were both cause and effect of the war. Most telling of all, it was adopted as one of a handful of Southern anthems even though it celebrated a state that never joined the Confederacy. In Maryland, My Maryland: Music and Patriotism during the American Civil War James A. Davis illuminates the incongruities underlying this Civil War anthem and what they reveal about patriotism during the war. The geographic specificity of the song's lyrics allowed the contest between regional and national loyalties to be fought on bandstands as well as battlefields and enabled "Maryland, My Maryland" to contribute to the shift in patriotic allegiance from a specific, localized, and material place to an ambiguous, inclusive, and imagined space. Musical patriotism, it turns out, was easy to perform but hard to define for Civil War–era Americans. 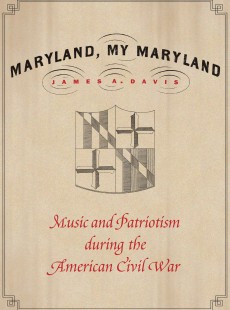 Music and Patriotism during the American Civil War