In the spring of 1964, the Nankai Hawks of Japan's Pacific League sent nineteen-year-old Masanori Murakami to the Class A Fresno Giants to improve his skills. To nearly everyone's surprise, Murakami, known as Mashi, dominated the American hitters. With the San Francisco Giants caught in a close pennant race and desperate for a left-handed reliever, Masanori was called up to join the big league club, becoming the first Japanese player in the Major Leagues.Featuring pinpoint control, a devastating curveball, and a friendly smile, Mashi became the Giants' top lefty reliever and one of the team's most popular players—as well as a national hero in Japan. Not surprisingly, the Giants offered him a contract for the 1965 season. Murakami signed, announcing that he would be thrilled to stay in San Francisco. There was just one problem: the Nankai Hawks still owned his contract.The dispute over Murakami's contract would ignite an international incident that ultimately prevented other Japanese players from joining the Majors for thirty years. Mashi is the story of an unlikely hero who gets caught up in an American and Japanese baseball dispute and is forced to choose between his dreams in the United States and his duty in Japan. 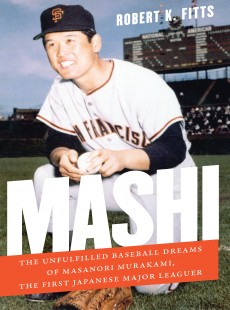