Mastered by the Clock is the first work to explore the evolution of clock-based time consciousness in the American South. Challenging traditional assumptions about the plantation economy's reliance on a premodern, nature-based conception of time, Mark M. Smith shows how and why southerners--particularly masters and their slaves--came to view the clock as a legitimate arbiter of time. Drawing on an extraordinary range of eighteenth- and nineteenth-century archival sources, Smith demonstrates that white southern slaveholders began to incorporate this new sense of time in the 1830s. Influenced by colonial merchants' fascination with time thrift, by a long-held familiarity with urban, public time, by the transport and market revolution in the South, and by their own qualified embrace of modernity, slaveowners began to purchase timepieces in growing numbers, adopting a clock-based conception of time and attempting in turn to instill a similar consciousness in their slaves. But, forbidden to own watches themselves, slaves did not internalize this idea to the same degree as their masters, and slaveholders found themselves dependent as much on the whip as on the clock when enforcing slaves' obedience to time. Ironically, Smith shows, freedom largely consolidated the dependence of masters as well as freedpeople on the clock. 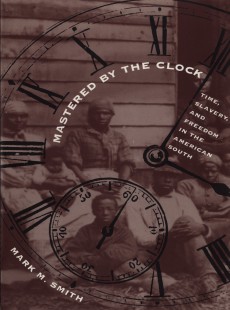 Mastered by the Clock

Time, Slavery, and Freedom in the American South