After the fall of the Porfirio Díaz regime, pueblo representatives sent hundreds of petitions to Pres. Francisco I. Madero, demanding that the executive branch of government assume the judiciary's control over their unresolved lawsuits against landowners, local bosses, and other villages. The Madero administration tried to use existing laws to settle land conflicts but always stopped short of invading judicial authority. In contrast, the two main agrarian reform programs undertaken in revolutionary Mexico—those implemented by Emiliano Zapata and Venustiano Carranza—subordinated the judiciary to the executive branch and thereby reshaped the postrevolutionary state with the support of villagers, who actively sided with one branch of government over another. In Matters of Justice Helga Baitenmann offers the first detailed account of the Zapatista and Carrancista agrarian reform programs as they were implemented in practice at the local level and then reconfigured in response to unanticipated inter- and intravillage conflicts. Ultimately, the Zapatista land reform, which sought to redistribute land throughout the country, remained an unfulfilled utopia. In contrast, Carrancista laws, intended to resolve quickly an urgent problem in a time of war, had lasting effects on the legal rights of millions of land beneficiaries and accidentally became the pillar of a program that redistributed about half the national territory. 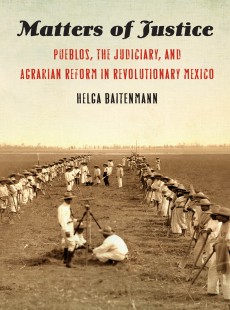 Pueblos, the Judiciary, and Agrarian Reform in Revolutionary Mexico