In Messianic Fulfillments Hayes Peter Mauro examines the role of Christian evangelical movements in shaping American identity in the seventeenth, eighteenth, and nineteenth centuries. Focusing on Christianity's fervent pursuit of Native American salvation, Mauro discusses Anglo American artists influenced by Christian millenarianism, natural history, and racial science in America. Artists on the colonial, antebellum, and post–Civil War frontier graphically projected their idealization of Christian-based identity onto the bodies of American Indians.Messianic Fulfillments explores how Puritans, Quakers, Mormons, and members of other Christian millenarian movements viewed Native peoples as childlike, primitive, and in desperate need of Christianization lest they fall into perpetual sin and oblivion and slip into eternal damnation. Christian missionaries were driven by the idea that catastrophic Native American spiritual failure would, in Christ's eyes, reflect on the shortcomings of those Christians tasked with doing the work of Christian "charity" in the New World.

With an interdisciplinary approach drawing from religious studies and the histories of popular science and art, Messianic Fulfillments explores ethnohistorical encounters in colonial and nineteenth-century America through the lens of artistic works by evangelically inspired Anglo American artists and photographers. Mauro takes a critical look at a variety of visual mediums to illustrate how evangelical imagery influenced definitions of "Americaness," and how such images reinforced or challenged historically prevailing conceptions of what it means (and looks like) to be American. 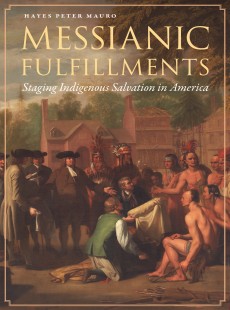