Providing new insight on the intellectual and cultural dimensions of the Cold War, Michael Latham reveals how social science theory helped shape American foreign policy during the Kennedy administration. He shows how, in the midst of America's protracted struggle to contain communism in the developing world, the concept of global modernization moved beyond its beginnings in academia to become a motivating ideology behind policy decisions.

After tracing the rise of modernization theory in American social science, Latham analyzes the way its core assumptions influenced the Kennedy administration's Alliance for Progress with Latin America, the creation of the Peace Corps, and the strategic hamlet program in Vietnam. But as he demonstrates, modernizers went beyond insisting on the relevance of America's experience to the dilemmas faced by impoverished countries. Seeking to accelerate the movement of foreign societies toward a liberal, democratic, and capitalist modernity, Kennedy and his advisers also reiterated a much deeper sense of their own nation's vital strengths and essential benevolence. At the height of the Cold War, Latham argues, modernization recast older ideologies of Manifest Destiny and imperialism. 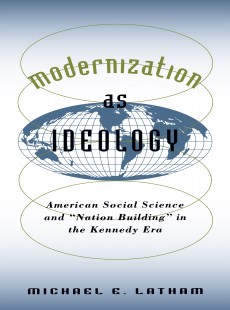 American Social Science and "Nation Building" in the Kennedy Era