What would separate Union and Confederate countries look like if the South had won the Civil War? In fact, this was something that southern secessionists actively debated. Imagining themselves as nation builders, they understood the importance of a plan for the economic structure of the Confederacy.

The traditional view assumes that Confederate slave-based agrarianism went hand in hand with a natural hostility toward industry and commerce. Turning conventional wisdom on its head, John Majewski's analysis finds that secessionists strongly believed in industrial development and state-led modernization. They blamed the South's lack of development on Union policies of discriminatory taxes on southern commerce and unfair subsidies for northern industry.

Majewski argues that Confederates' opposition to a strong central government was politically tied to their struggle against northern legislative dominance. Once the Confederacy was formed, those who had advocated states' rights in the national legislature in order to defend against northern political dominance quickly came to support centralized power and a strong executive for war making and nation building. 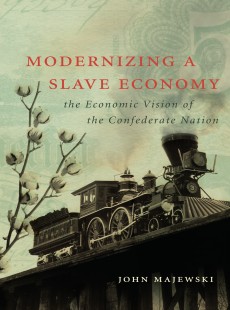 The Economic Vision of the Confederate Nation