The 1830s forced removal of Cherokees from their southeastern homeland became the most famous event in the Indian history of the American South, an episode taken to exemplify a broader experience of injustice suffered by Native peoples. In this book, Andrew Denson explores the public memory of Cherokee removal through an examination of memorials, historic sites, and tourist attractions dating from the early twentieth century to the present. White southerners, Denson argues, embraced the Trail of Tears as a story of Indian disappearance. Commemorating Cherokee removal affirmed white possession of southern places, while granting them the moral satisfaction of acknowledging past wrongs. During segregation and the struggle over black civil rights, removal memorials reinforced whites' authority to define the South's past and present. Cherokees, however, proved capable of repossessing the removal memory, using it for their own purposes during a time of crucial transformation in tribal politics and U.S. Indian policy. In considering these representations of removal, Denson brings commemoration of the Indian past into the broader discussion of race and memory in the South. 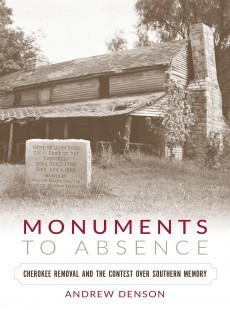 Cherokee Removal and the Contest over Southern Memory