Between 1865 and 1920, Congress passed laws to regulate obscenity, sexuality, divorce, gambling, and prizefighting. It forced Mormons to abandon polygamy, attacked interstate prostitution, made narcotics contraband, and stopped the manufacture and sale of alcohol. Gaines Foster explores the force behind this unprecedented federal regulation of personal morality--a combined Christian lobby.

Foster analyzes the fears of appetite and avarice that led organizations such as the Women's Christian Temperance Union and the National Reform Association to call for moral legislation and examines the efforts and interconnections of the men and women who lobbied for it. His account underscores the crucial role white southerners played in the rise of moral reform after 1890. With emancipation, white southerners no longer needed to protect slavery from federal intervention, and they seized on moral legislation as a tool for controlling African Americans.

Enriching our understanding of the aftermath of the Civil War and the expansion of national power, Moral Reconstruction also offers valuable insight into the link between historical and contemporary efforts to legislate morality. 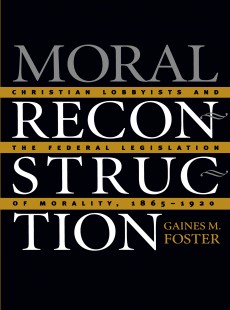 Christian Lobbyists and the Federal Legislation of Morality, 1865-1920