Shortly after being elected president of the United States, James Garfield was shot by Charles Guiteau. But contrary to what is written in most history books, Garfield didn't linger and die. He survived. Alexander Graham Bell raced against time to invent the world's first metal detector to locate the bullet in Garfield's body so that doctors could safely operate. Despite Bell's efforts to save Garfield, however, and as never before fully revealed, the interventions of Garfield's friend and doctor, Dr. D. W. Bliss, brought about the demise of the nation's twentieth president.   But why would a medical doctor engage in such monstrous behavior? Did politics, petty jealousy, or failed aspirations spark the fire inside Bliss that led him down the path of homicide? Rosen proves how depraved indifference to human life—second-degree murder—rather than ineptitude led to Garfield's drawn-out and painful death. Now, more than one hundred years later, historian and homicide investigator Fred Rosen reveals through newly accessed documents and Bell's own correspondence the long list of Bliss's criminal acts and malevolent motives that led to his murder of the president. 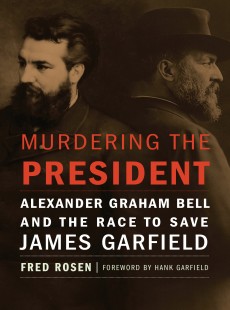 Alexander Graham Bell and the Race to Save James Garfield