Over the course of several centuries, Venice fashioned and refined a portrait of itself that responded to and exploited historical circumstance. Never conquered and taking its enduring independence as a sign of divine favor, free of civil strife and proud of its internal stability, Venice broadcast the image of itself as the Most Serene Republic, an ideal state whose ruling patriciate were selflessly devoted to the commonweal. All this has come to be known as the "myth of Venice."

Exploring the imagery developed in Venice to represent the legends of its origins and legitimacy, David Rosand reveals how artists such as Gentile and Giovanni Bellini, Carpaccio, Titian, Jacopo Sansovino, Tintoretto, and Veronese gave enduring visual form to the myths of Venice. He argues that Venice, more than any other political entity of the early modern period, shaped the visual imagination of political thought. This visualization of political ideals, and its reciprocal effect on the civic imagination, is the larger theme of the book. 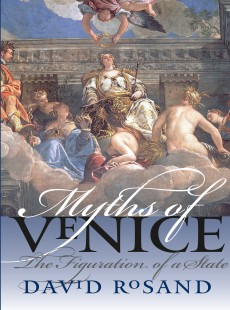 The Figuration of a State