It is the most celebrated escape in the history of American slavery. Henry Brown had himself sealed in a three-foot-by-two-foot box and shipped from Richmond, Virginia, to Philadelphia, a twenty-seven-hour journey to freedom. In Narrative of the Life of Henry Box Brown, Written by Himself, Brown not only tells the story of his famed escape, but also recounts his later life as a black man making his way through white American and British culture. Most important, he paints a revealing portrait of the reality of slavery, of the wife and children sold away from him, the home to which he could not return, and his rejection of the slaveholders' religion--painful episodes that fueled his desire for freedom.

This edition comprises the most complete and faithful representation of Brown's life, fully annotated for the first time. John Ernest also provides an insightful introduction that places Brown's life in its historical setting and illuminates the challenges Brown faced in an often threatening world, both before and after his legendary escape. 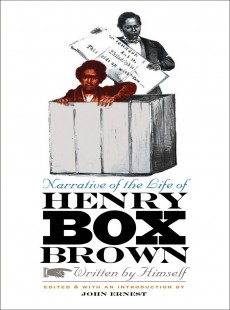 Narrative of the Life of Henry Box Brown, Written by Himself