In this ambitious and innovative study Gregg Brazinsky examines American nation building in South Korea during the Cold War. Marshaling a vast array of new American and Korean sources, he explains why South Korea was one of the few postcolonial nations that achieved rapid economic development and democratization by the end of the twentieth century. Brazinsky contends that a distinctive combination of American initiatives and Korean agency enabled South Korea's stunning transformation. On one hand, Americans supported the emergence of a developmental autocracy that spurred economic growth in a highly authoritarian manner. On the other hand, Americans sought to encourage democratization from the bottom up by fashioning new institutions and promoting a dialogue about modernization and development.

Expanding the framework of traditional diplomatic history, Brazinsky examines not only state-to-state relations, but also the social and cultural interactions between Americans and South Koreans. He shows how Koreans adapted, resisted, and transformed American influence and promoted socioeconomic change that suited their own aspirations. Ultimately, Brazinsky argues, Koreans' capacity to tailor American institutions and ideas to their own purposes was the most important factor in the making of a democratic South Korea. 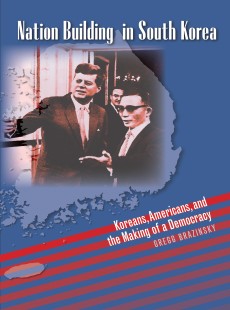 Koreans, Americans, and the Making of a Democracy