In the nineteenth century, nearly all Native American men living along the southern New England coast made their living traveling the world's oceans on whaleships. Many were career whalemen, spending twenty years or more at sea. Their labor invigorated economically depressed reservations with vital income and led to complex and surprising connections with other Indigenous peoples, from the islands of the Pacific to the Arctic Ocean. At home, aboard ship, or around the world, Native American seafarers found themselves in a variety of situations, each with distinct racial expectations about who was "Indian" and how "Indians" behaved. Treated by their white neighbors as degraded dependents incapable of taking care of themselves, Native New Englanders nevertheless rose to positions of command at sea. They thereby complicated myths of exploration and expansion that depicted cultural encounters as the meeting of two peoples, whites and Indians.

Highlighting the shifting racial ideologies that shaped the lives of these whalemen, Nancy Shoemaker shows how the category of "Indian" was as fluid as the whalemen were mobile. 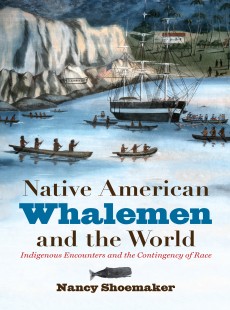 Native American Whalemen and the World

Indigenous Encounters and the Contingency of Race