How do the lives of indigenous peoples relate to the romanticized role of "Indians" in Brazilian history, politics, and cultural production? Native and National in Brazil charts this enigmatic relationship from the sixteenth century to the present, focusing on the consolidation of the dominant national imaginary in the postindependence period and highlighting Native peoples' ongoing work to decolonize it. Engaging issues ranging from sovereignty, citizenship, and national security to the revolutionary potential of art, sustainable development, and the gendering of ethnic differences, Tracy Devine Guzman argues that the tensions between popular renderings of "Indianness" and lived indigenous experience are critical to the unfolding of Brazilian nationalism, on the one hand, and the growth of the Brazilian indigenous movement, on the other.
Devine Guzman suggests that the "indigenous question" now posed by Brazilian indigenous peoples themselves--how to be Native and national at the same time--can help us to rethink national belonging in accordance with the protection of human rights, the promotion of social justice, and the consolidation of democratic governance for indigenous and nonindigenous citizens alike. 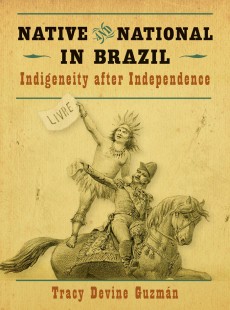 Native and National in Brazil