On 16 July 1941, Adolf Hitler convened top Nazi leaders at his headquarters in East Prussia to dictate how they would rule the newly occupied eastern territories. Ukraine, the "jewel" in the Nazi empire, would become a German colony administered by Heinrich Himmler's SS and police, Hermann Goring's economic plunderers, and a host of other satraps. Focusing on the Zhytomyr region and weaving together official German wartime records, diaries, memoirs, and personal interviews, Wendy Lower provides the most complete assessment available of German colonization and the Holocaust in Ukraine.

Midlevel "managers," Lower demonstrates, played major roles in mass murder, and locals willingly participated in violence and theft. Lower puts names and faces to local perpetrators, bystanders, beneficiaries, as well as resisters. She argues that Nazi actions in the region evolved from imperial arrogance and ambition; hatred of Jews, Slavs, and Communists; careerism and pragmatism; greed and fear. In her analysis of the murderous implementation of Nazi "race" and population policy in Zhytomyr, Lower shifts scholarly attention from Germany itself to the eastern outposts of the Reich, where the regime truly revealed its core beliefs, aims, and practices. 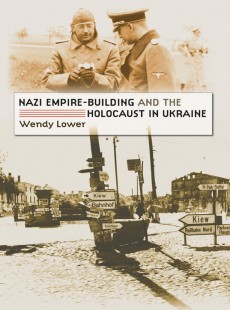 Nazi Empire-Building and the Holocaust in Ukraine