Never Caught Twice presents the untold history of horse raiding and stealing on the Great Plains of western Nebraska. By investigating horse stealing by and from four Plains groups—American Indians, the U.S. Army, ranchers and cowboys, and farmers—Matthew S. Luckett clarifies a widely misunderstood crime in Western mythology and shows that horse stealing transformed plains culture and settlement in fundamental and surprising ways. From Lakota and Cheyenne horse raids to rustling gangs in the Sandhills, horse theft was widespread and devastating across the region. The horse's critical importance in both Native and white societies meant that horse stealing destabilized communities and jeopardized the peace throughout the plains, instigating massacres and murders and causing people to act furiously in defense of their most expensive, most important, and most beloved property. But as it became increasingly clear that no one legal or military institution could fully control it, would-be victims desperately sought a solution that would spare their farms and families from the calamitous loss of a horse. For some, that solution was violence. Never Caught Twice shows how the story of horse stealing across western Nebraska and the Great Plains was in many ways the story of the old West itself. 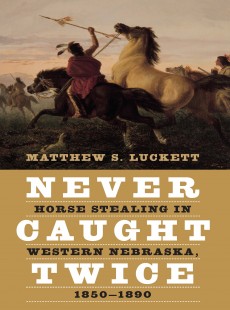