Between 1968 and 1980, fears about family deterioration and national decline were ubiquitous in American political culture. In No Direction Home, Natasha Zaretsky shows that these perceptions of decline profoundly shaped one another.

Throughout the 1970s, anxieties about the future of the nuclear family collided with anxieties about the direction of the United States in the wake of military defeat in Vietnam and in the midst of economic recession, Zaretsky explains. By exploring such themes as the controversy surrounding prisoners of war in Southeast Asia, the OPEC oil embargo of 1973-74, and debates about cultural narcissism, Zaretsky reveals that the 1970s marked a significant turning point in the history of American nationalism. After Vietnam, a wounded national identity--rooted in a collective sense of injury and fueled by images of family peril--exploded to the surface and helped set the stage for the Reagan Revolution. With an innovative analysis that integrates cultural, intellectual, and political history, No Direction Home explores the fears that not only shaped an earlier era but also have reverberated into our own time. 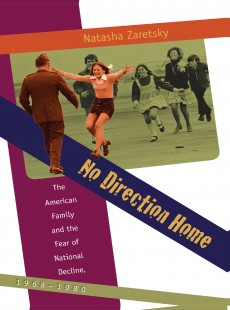