In the early 1960s, thousands of Black activists used nonviolent direct action to challenge segregation at lunch counters, movie theaters, skating rinks, public pools, and churches across the United States, battling for, and winning, social change. Organizers against segregation had used litigation and protests for decades but not until the advent of nonviolence did they succeed in transforming ingrained patterns of white supremacy on a massive scale. In this book, Anthony C. Siracusa unearths the deeper lineage of anti-war pacifist activists and thinkers from the early twentieth century who developed nonviolence into a revolutionary force for Black liberation.

Telling the story of how this powerful political philosophy came to occupy a central place in the Black freedom movement by 1960, Siracusa challenges the idea that nonviolent freedom practices faded with the rise of the Black Power movement. He asserts nonviolence's staying power, insisting that the indwelling commitment to struggle for freedom collectively in a spirit of nonviolence became, for many, a lifelong commitment. In the end, what was revolutionary about the nonviolent method was its ability to assert the basic humanity of Black Americans, to undermine racism's dehumanization, and to insist on the right to be. 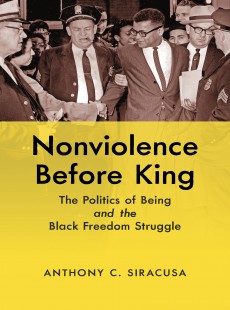 The Politics of Being and the Black Freedom Struggle