In 1870 a twenty-six-year-old Paiute, Sarah Winnemucca, wrote to an army officer requesting that Paiutes be given a chance to settle and farm their ancestral land. The eloquence of her letter was such that it made its way into Harper's Weekly. Ten years later, as her people languished in confinement as a result of the Bannock War, she convinced Secretary of the Interior Carl Schurz to grant the requests in her letter and free the Paiutes as well. Schurz's decision unleashed furious opposition from the Bureau of Indian Affairs, cattlemen, and settlers. A campaign of disinformation by government officials followed, sweeping truth aside and falsely branding Paiute chief Egan as instigator and leader of the Indian forces. The campaign succeeded in its mission to overturn Schurz's decision. To this day histories of the war appear to be unanimous in their mistaken claim that Egan led his Paiutes into war. Indian agents' betrayal of the people they were paid to protect saddled Paiutes with responsibility for a war that most opposed and that led to U.S. misappropriation of their land, their only source of life's necessities. With neither land nor reservation, Paiutes were driven more deeply into poverty and disease than any other Natives of that era. David H. Wilson Jr. pulls back the curtain to reveal what government officials hid—exposing the full jarring injustice and, after 140 years, recounting the Paiutes' true and proud history for the first time. 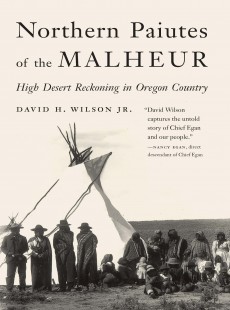 Northern Paiutes of the Malheur