When Richie Thorpe and his ragtag religious band of ex-thieves arrive in the High Plains town of Suborney, Colorado, Tommy Sandor is captivated by the group. It's the summer of 1980 in the dusty, junkyard town, and the seventeen-year-old is wrestling with the forces shaping America and himself: the Iran hostage crisis, the incoming tide of Ronald Reagan's presidency, and the political rise of the Christian Right. As Tommy is increasingly drawn to the group, his mother, Connie, grows frantic. She has been hiding the truth from her son, telling him that his father was a saxophonist from New York who never knew he had a child, and is lying low in Suborney to hide from Tommy's actual father—Richie Thorpe. Connie knows Richie has come for his son, and though she has witnessed Thorpe's mysterious powers, the desperation to protect her lie, her son, and their life begets a venom with an elemental power that threatens the whole town. 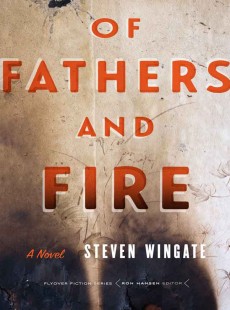 Of Fathers and Fire