In this remarkable and engaging book, William LeoGrande offers the first comprehensive history of U.S. foreign policy toward Central America in the waning years of the Cold War. From the overthrow of the Somoza dynasty in Nicaragua and the outbreak of El Salvador's civil war in the late 1970s to the final regional peace settlements negotiated a decade later, he chronicles the dramatic struggles--in Washington and Central America--that shaped the region's destiny.
For good or ill, LeoGrande argues, Central America's fate hinged on decisions that were subject to intense struggles among, and within, Congress, the CIA, the Pentagon, the State Department, and the White House--decisions over which Central Americans themselves had little influence. Like the domestic turmoil unleashed by Vietnam, he says, the struggle over Central America was so divisive that it damaged the fabric of democratic politics at home. It inflamed the tug-of-war between Congress and the executive branch over control of foreign policy and ultimately led to the Iran-contra affair, the nation's most serious political crisis since Watergate. 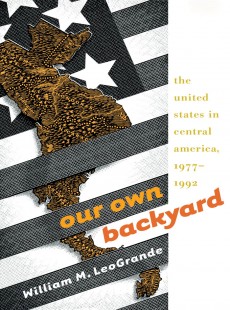