Based loosely on the author's life, this novel recounts the narrator's journey following the footsteps of his Mauritius-born grandfather, Maxime, who abruptly boarded a boat bound for Madagascar in 1922 and never returned. Michaël Ferrier tells a tale of discovery as well as the elusive, colorful story of Maxime's life in Madagascar, which included a stint as an acrobat in a traveling circus and, later, as a diver and artist on marine expeditions. Maxime's story is one of adventure but also romance. He falls in love with a refined young Pauline Nuñes, Ferrier's grandmother, whose well-to-do family of Indian merchants owns a hotel famous for playing the latest music—including American jazz—and throwing popular dances and parties. Over Seas of Memory weaves these personal stories with the island's history, including its period as a Vichy-governed territory at the center of what was termed "Project Madagascar," the Nazi plan to relocate Europe's Jewish population to the island. As Ferrier interlaces his family's intimate story with the larger story of colonialism's lasting and complicated impact—including the racial and ethnic divisions it fomented—he engages with critical issues in contemporary France concerning national and cultural identity. 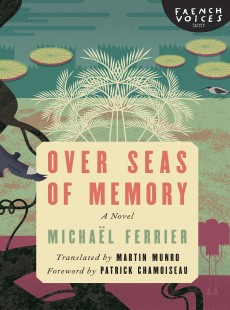 Over Seas of Memory