At the outset of the eighteenth century, many British Americans accepted the notion that virtuous sociable feelings occurred primarily among the genteel, while sinful and selfish passions remained the reflexive emotions of the masses, from lower-class whites to Indians to enslaved Africans. Yet by 1776 radicals would propose a new universal model of human nature that attributed the same feelings and passions to all humankind and made common emotions the basis of natural rights. In Passion Is the Gale, Nicole Eustace describes the promise and the problems of this crucial social and political transition by charting changes in emotional expression among countless ordinary men and women of British America.

From Pennsylvania newspapers, pamphlets, sermons, correspondence, commonplace books, and literary texts, Eustace identifies the explicit vocabulary of emotion as a medium of human exchange. Alternating between explorations of particular emotions in daily social interactions and assessments of emotional rhetoric's functions in specific moments of historical crisis (from the Seven Years War to the rise of the patriot movement), she makes a convincing case for the pivotal role of emotion in reshaping power relations and reordering society in the critical decades leading up to the Revolution. As Eustace demonstrates, passion was the gale that impelled Anglo-Americans forward to declare their independence--collectively at first, and then, finally, as individuals. 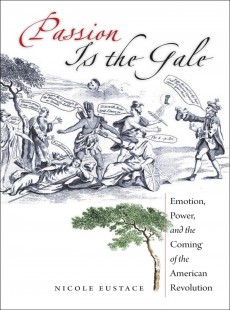 Passion Is the Gale

Emotion, Power, and the Coming of the American Revolution