Long before baseball became America's national pastime, English citizens of all ages, genders, and classes of society were playing a game called baseball. It had the same basic elements as modern American baseball, such as pitching and striking the ball, running bases, and fielding, but was played with a soft ball on a smaller playing field and, instead of a bat, the ball was typically struck by the palm of the hand. There is no doubt, however, that this simpler English version of baseball was the original form of the pastime and was the immediate forerunner of its better-known American offspring. Strictly a social game, English baseball was played for nearly two hundred years before fading away at the beginning of the twentieth century. Despite its longevity and its important role in baseball's evolution, however, today it has been completely forgotten. In Pastime Lost David Block unearths baseball's buried history and brings it back to life, illustrating how English baseball was embraced by all sectors of English society and exploring some of the personalities, such as Jane Austen and King George III, who played the game in their childhoods. While rigorously documenting his sources, Block also brings a light touch to his story, inviting us to follow him on some of the adventures that led to his most important discoveries.  Purchase the audio edition. 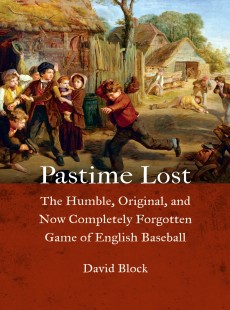