The Rev. Dr. Anna Pauline "Pauli" Murray (1910–1985) was a trailblazing social activist, writer, lawyer, civil rights organizer, and campaigner for gender rights. In the 1930s and 1940s, she was active in radical left-wing political groups and helped innovate nonviolent protest strategies against segregation that would become iconic in later decades, and in the 1960s, she cofounded the National Organization for Women (NOW). In addition, Murray became the first African American to receive a Yale law doctorate and the first black woman to be ordained an Episcopal priest. Yet, behind her great public successes, Murray battled many personal demons, including bouts of poor physical and mental health, conflicts over her gender and sexual identities, family traumas, and financial difficulties.

In this intimate biography, Troy Saxby provides the most comprehensive account of Murray's inner life to date, revealing her struggles in poignant detail and deepening our understanding and admiration of her numerous achievements in the face of pronounced racism, homophobia, transphobia, and political persecution. Saxby interweaves the personal and the political, showing how the two are always entwined, to tell the life story of one of twentieth-century America's most fascinating and inspirational figures. 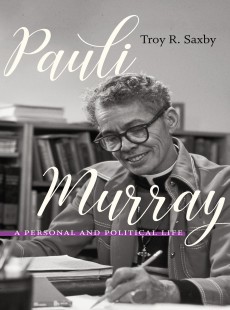 A Personal and Political Life