The last days of fighting in the Civil War's eastern theater have been wrapped in mythology since the moment of Lee's surrender to Grant at Appomattox Court House. War veterans and generations of historians alike have focused on the seemingly inevitable defeat of the Confederacy after Lee's flight from Petersburg and recalled the generous surrender terms set forth by Grant, thought to facilitate peace and to establish the groundwork for sectional reconciliation. But this volume of essays by leading scholars of the Civil War era offers a fresh and nuanced view of the eastern war's closing chapter. Assessing events from the siege of Petersburg to the immediate aftermath of Lee's surrender, Petersburg to Appomattox blends military, social, cultural, and political history to reassess the ways in which the war ended and examines anew the meanings attached to one of the Civil War's most significant sites, Appomattox. 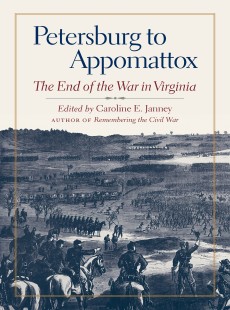 The End of the War in Virginia