Remembered in name but underappreciated in legacy, Forrest "Phog" Allen arguably influenced the game of basketball more than anyone else.  In the first half of the twentieth century Allen took basketball from a gentlemanly, indoor recreation to the competitive game that would become a worldwide sport. Succeeding James Naismith as the University of Kansas's basketball coach in 1907, Allen led the Jayhawks for thirty-nine seasons and holds the record for most wins at that school, with 590. He also helped create the NCAA tournament and brought basketball to the Olympics. Allen changed the way the game is played, coached, marketed, and presented. Scott Morrow Johnson reveals Allen as a master recruiter, a transformative coach, and a visionary basketball mind. Adolph Rupp, Dean Smith, Wilt Chamberlain, and many others benefited from Allen's knowledge of and passion for the game. But Johnson also delves into Allen's occasionally tumultuous relationships with Naismith, the NCAA, and University of Kansas administrators.Phog: The Most Influential Man in Basketball chronicles this complex man's life, telling for the first time the full story of the man whose name is synonymous with Kansas basketball and with the game itself. 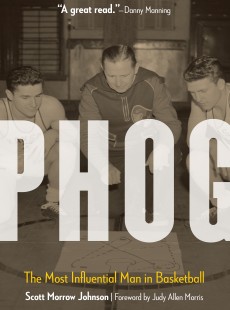 The Most Influential Man in Basketball