Visions of Freedom: Havana, Washington, Pretoria, and the Struggle for Southern Africa, 1976-1991

During the final fifteen years of the Cold War, southern Africa underwent a period of upheaval, with dramatic twists and turns in relations between the superpowers. Americans, Cubans, Soviets, and Africans fought over the future of Angola, where tens of thousands of Cuban soldiers were stationed, and over the decolonization of Namibia, Africa's last colony. Beyond lay the great prize: South Africa. Piero Gleijeses uses archival sources, particularly from the United States, South Africa, and the closed Cuban archives, to provide an unprecedented international history of this important theater of the late Cold War.

This sweeping history of Cuban policy in Africa from 1959 to 1976 is based on unprecedented research in African, Cuban, and American archives. (Among Gleijeses's many sources are Cuban archival materials to which he is the only non-Cuban to ever have access.) Setting his story within the context of U.S. policy toward both Africa and Cuba during the Cold War, Gleijeses challenges the notion that Cuban policy in Africa was directed by the Soviet Union. 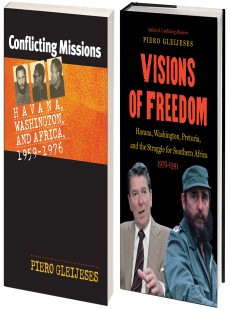