Basketball has a lock on the Filipino soul. From big arenas in Manila to makeshift hoops in small villages, basketball is played by Filipinos of all walks of life and is used to mark everything from summer breaks for students to religious festivals and many other occasions. Playing with the Big Boys traces the social history of basketball in the Philippines from an educational and “civilizing” tool in the early twentieth century to its status as national pastime since the country gained independence after World War II.   While the phrase “playing with the big boys” describes the challenge of playing basketball against outsized opponents, it also describes the struggle for recognition that the Philippines, as a subaltern society, has had to contend with in its larger transnational relationships as a former U.S. colony.  Lou Antolihao goes beyond the empire-colony dichotomy by covering Filipino basketball in a wider range of comparisons, such as that involving the growing influence of Asia in its region, particularly China and Japan. In this context, Antolihao shows how Philippines basketball has moved from a vehicle for Americanization to a force for globalization in which the United States, while still a key player, is challenged by other basketball-playing countries. 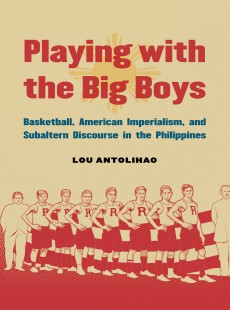 Playing with the Big Boys

Basketball, American Imperialism, and Subaltern Discourse in the Philippines