In 1965 George Gmelch signed a contract to play professional baseball with the Detroit Tigers organization. Growing up sheltered in an all-white, affluent San Francisco suburb, he knew little of the world outside. Over the next four seasons, he came of age in baseball's Minor Leagues through experiences ranging from learning the craft of the professional game to becoming conscious of race and class for the first time. Playing with Tigers is not a typical baseball memoir. Now a well-known anthropologist, Gmelch recounts a baseball education unlike any other as he got to know small-town life across the United States against the backdrop of the Vietnam War, civil rights protests, and the emergence of the counterculture. The social and political turmoil of the times spilled into baseball, and Gmelch experienced the consequences firsthand as he played out his career in the Jim Crow South. Playing with Tigers captures the gritty, insular, and humorous life and culture of Minor League baseball during a period when both the author and the country were undergoing profound changes. Drawing from journals he kept as a player, letters, and recent interviews with thirty former teammates, coaches, club officials, and even former girlfriends, Gmelch immerses the reader in the life of the Minor Leagues, capturing—in a manner his unique position makes possible—the universal struggle of young athletes trying to make their way. 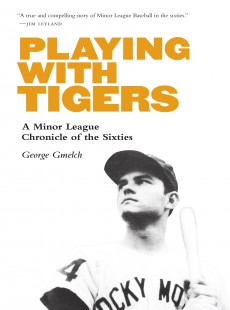 A Minor League Chronicle of the Sixties