Over fifty years ago sociologist T. H. Marshall first opened the modern debate about the evolution of full citizenship in modern nation-states, arguing that it proceeded in three stages: from civil rights, to political rights, and finally to social rights. The shortcomings of this model were clear to feminist scholars. As political theorist Carol Pateman argued, the modern social contract undergirding nation-states was from the start premised on an implicit "sexual contract." According to Pateman, the birth of modern democracy necessarily resulted in the political erasure of women. Since the 1990s feminist historians have realized that Marshall's typology failed to describe adequately developments that affected women in France. An examination of the role of women and gender in welfare-state development suggested that social rights rooted in republican notions of womanhood came early and fast for women in France even while political and economic rights would continue to lag behind. While their considerable access to social citizenship privileges shaped their prospects, the absence of women's formal rights still dominates the conversation. Practiced Citizenship offers a significant rereading of that narrative. Through an analysis of how citizenship was lived, practiced, and deployed by women in France in the modern period, Practiced Citizenship demonstrates how gender normativity and the resulting constraints placed on women nevertheless created opportunities for a renegotiation of the social and sexual contract. 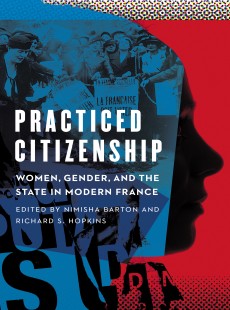 Women, Gender, and the State in Modern France