In Quagmire you'll find a range of voices men and women, military and civilian and a range of perspectives from the homeland, the combat zone, and war's aftermath. These personal responses to war in Iraq and Afghanistan have been selected from War, Literature & the Arts: An International Journal of the Humanities to mark the thirtieth anniversary of its inaugural publication. The responses cover approximately fifteen years of the United States' conflicts in Iraq and Afghanistan and demonstrate the aftermath of war and the degreed ripples that extend beyond soldiers to families and friends, lovers, hometowns, even pets. As citizens, Pablo Neruda advised, we have an obligation to "come and see the blood in the streets." To ignore what we do in war and what war does to us is to move willfully toward ignorance. To ignore such reminders imperils ourselves, our communities, and our nation. 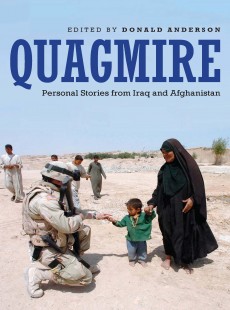 Personal Stories from Iraq and Afghanistan