Atlanta is often cited as a prime example of a progressive New South metropolis in which blacks and whites have forged "a city too busy to hate." But Ronald Bayor argues that the city continues to bear the indelible mark of racial bias. Offering the first comprehensive history of Atlanta race relations, he discusses the impact of race on the physical and institutional development of the city from the end of the Civil War through the mayorship of Andrew Young in the 1980s. Bayor shows the extent of inequality, investigates the gap between rhetoric and reality, and presents a fresh analysis of the legacy of segregation and race relations for the American urban environment.
Bayor explores frequently ignored public policy issues through the lens of race--including hospital care, highway placement and development, police and fire services, schools, and park use, as well as housing patterns and employment. He finds that racial concerns profoundly shaped Atlanta, as they did other American cities. Drawing on oral interviews and written records, Bayor traces how Atlanta's black leaders and their community have responded to the impact of race on local urban development. By bringing long-term urban development into a discussion of race, Bayor provides an element missing in usual analyses of cities and race relations. 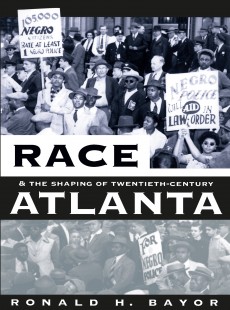 Race and the Shaping of Twentieth-Century Atlanta