In the United States, it is quite common to lay claim to the benefits of society by appealing to "taxpayer citizenship--the idea that, as taxpayers, we deserve access to certain social services like a public education. Tracing the genealogy of this concept, Camille Walsh shows how tax policy and taxpayer identity were built on the foundations of white supremacy and intertwined with ideas of whiteness. From the origins of unequal public school funding after the Civil War through school desegregation cases from Brown v. Board of Education to San Antonio v. Rodriguez in the 1970s, this study spans over a century of racial injustice, dramatic courtroom clashes, and white supremacist backlash to collective justice claims.

Incorporating letters from everyday individuals as well as the private notes of Supreme Court justices as they deliberated, Walsh reveals how the idea of a "taxpayer" identity contributed to the contemporary crises of public education, racial disparity, and income inequality. 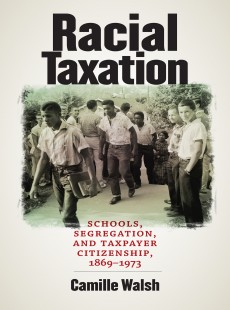