In the early twentieth century, a group of women workers hired to apply luminous paint to watch faces and instrument dials found themselves among the first victims of radium poisoning. Claudia Clark's book tells the compelling story of these women, who at first had no idea that the tedious task of dialpainting was any different from the other factory jobs available to them. But after repeated exposure to the radium-laced paint, they began to develop mysterious, often fatal illnesses that they traced to conditions in the workplace. Their fight to have their symptoms recognized as an industrial disease represents an important chapter in the history of modern health and labor policy. Clark's account emphasizes the social and political factors that influenced the responses of the workers, managers, government officials, medical specialists, and legal authorities involved in the case. She enriches the story by exploring contemporary disputes over workplace control, government intervention, and industry-backed medical research. Finally, in appraising the dialpainters' campaign to secure compensation and prevention of further incidents--efforts launched with the help of the reform-minded, middle-class women of the Consumers' League--Clark is able to evaluate the achievements and shortcomings of the industrial health movement as a whole. 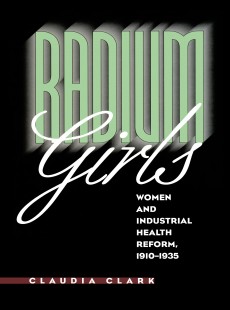