Railroads, tourism, and government bureaucracy combined to create modern religion in the American West, argues David Walker in this innovative study of Mormonism's ascendency in the railroad era. The center of his story is Corinne, Utah—an end-of-the-track, hell-on-wheels railroad town founded by anti-Mormon businessmen. In the disputes over this town's frontier survival, Walker discovers intense efforts by a variety of theological, political, and economic interest groups to challenge or secure Mormonism's standing in the West. Though Corinne's founders hoped to leverage industrial capital to overthrow Mormon theocracy, the town became the site of a very different dream.

Economic and political victory in the West required the production of knowledge about different religious groups settling in its lands. As ordinary Americans advanced their own theories about Mormondom, they contributed to the rise of religion itself as a category of popular and scholarly imagination. At the same time, new and advantageous railroad-related alliances catalyzed LDS Church officials to build increasingly dynamic religious institutions. Through scrupulous research and wide-ranging theoretical engagement, Walker shows that western railroads did not eradicate or diminish Mormon power. To the contrary, railroad promoters helped establish Mormonism as a normative American religion. 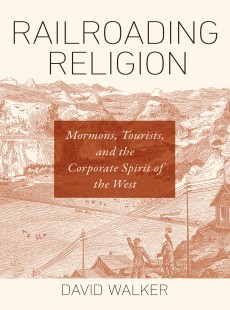 Mormons, Tourists, and the Corporate Spirit of the West