In a comprehensive examination of rape and its prosecution in British America between 1700 and 1820, Sharon Block exposes the dynamics of sexual power on which colonial and early republican Anglo-American society was based.

Block analyzes the legal, social, and cultural implications of more than nine hundred documented incidents of sexual coercion and hundreds more extralegal commentaries found in almanacs, newspapers, broadsides, and other print and manuscript sources. Highlighting the gap between reports of coerced sex and incidents that were publicly classified as rape, Block demonstrates that public definitions of rape were based less on what actually happened than on who was involved. She challenges conventional narratives that claim sexual relations between white women and black men became racially charged only in the late nineteenth century. Her analysis extends racial ties to rape back into the colonial period and beyond the boundaries of the southern slave-labor system. Early Americans' treatment of rape, Block argues, both enacted and helped to sustain the social, racial, gender, and political hierarchies of a New World and a new nation. 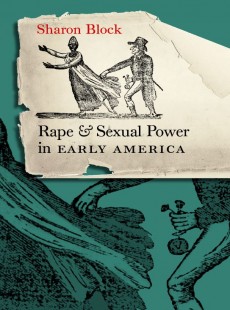