In the spring of 1861, Richmond, Virginia, suddenly became the capital city, military headquarters, and industrial engine of a new nation fighting for its existence. A remarkable drama unfolded in the months that followed. The city's population exploded, its economy was deranged, and its government and citizenry clashed desperately over resources to meet daily needs while a mighty enemy army laid siege. Journalists, officials, and everyday residents recorded these events in great detail, and the Confederacy's foes and friends watched closely from across the continent and around the world.

In Rebel Richmond, Stephen V. Ash vividly evokes life in Richmond as war consumed the Confederate capital. He guides readers from the city's alleys, homes, and shops to its churches, factories, and halls of power, uncovering the intimate daily drama of a city transformed and ultimately destroyed by war. Drawing on the stories and experiences of civilians and soldiers, slaves and masters, refugees and prisoners, merchants and laborers, preachers and prostitutes, the sick and the wounded, Ash delivers a captivating new narrative of the Civil War's impact on a city and its people. 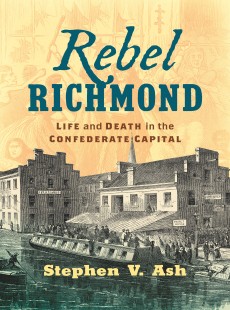 Life and Death in the Confederate Capital