Between late 1863 and mid-1864, an armed band of Confederate deserters battled Confederate cavalry in the Piney Woods region of Jones County, Mississippi. Calling themselves the Knight Company after their captain, Newton Knight, and aided by women, slaves, and children who spied on the Confederacy and provided food and shelter, they set up headquarters in the swamps of the Leaf River. There, legend has it, they declared the Free State of Jones.

In this UNC Press Short, excerpted from The Free State of Jones: Mississippi's Longest Civil War, Victoria E. Bynum traces Newton Knight's story from his enlistment in the Confederate Army, to his desertion and formation of the Knight Company, to the violent clashes with Confederate authorities that culminated in the infamous Lowry raids of 1864.

UNC Press Civil War Shorts excerpt compelling, shorter narratives from selected best-selling books published by the University of North Carolina Press and present them as engaging, quick reads. Produced exclusively in ebook format, these shorts present essential concepts, defining moments, and concise introductions to topics. They are intended to stir the imagination and encourage further exploration of the original publications from which these works are drawn. 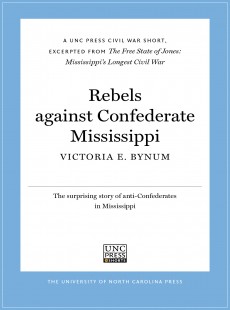