In the years just before the Civil War, during the most intensive phase of American slave-trade suppression, the U.S. Navy seized roughly 2,000 enslaved Africans from illegal slave ships and brought them into temporary camps at Key West and Charleston. In this study, Sharla Fett reconstructs the social world of these "recaptives" and recounts the relationships they built to survive the holds of slave ships, American detention camps, and, ultimately, a second transatlantic voyage to Liberia. Fett also demonstrates how the presence of slave-trade refugees in southern ports accelerated heated arguments between divergent antebellum political movements--from abolitionist human rights campaigns to slave-trade revivalism--that used recaptives to support their claims about slavery, slave trading, and race.

By focusing on shipmate relations rather than naval exploits or legal trials, and by analyzing the experiences of both children and adults of varying African origins, Fett provides the first history of U.S. slave-trade suppression centered on recaptive Africans themselves. In so doing, she examines the state of "recaptivity" as a distinctive variant of slave-trade captivity and situates the recaptives' story within the broader diaspora of "Liberated Africans" throughout the Atlantic world. 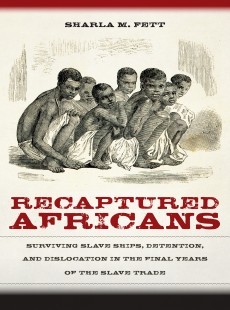 Surviving Slave Ships, Detention, and Dislocation in the Final Years of the Slave Trade