Reclaiming 42 centers on one of America's most respected cultural icons, Jackie Robinson, and the forgotten aspects of his cultural legacy. Since his retirement in 1956, and more strongly in the last twenty years, America has primarily remembered Robinson's legacy in an oversimplified way, as the pioneering first black baseball player to integrate the Major Leagues. The mainstream commemorative discourse regarding Robinson's career has been created and directed largely by Major League Baseball (MLB), which sanitized and oversimplified his legacy into narratives of racial reconciliation that celebrate his integrity, character, and courage while excluding other aspects of his life, such as his controversial political activity, his public clashes with other prominent members of the black community, and his criticism of MLB. MLB's commemoration of Robinson reflects a professional sport that is inclusive, racially and culturally tolerant, and largely postracial. Yet Robinson's identity—and therefore his memory—has been relegated to the boundaries of a baseball diamond and to the context of a sport, and it is within this oversimplified legacy that history has failed him. The dominant version of Robinson's legacy ignores his political voice during and after his baseball career and pays little attention to the repercussions that his integration had on many factions within the black community.Reclaiming 42 illuminates how public memory of Robinson has undergone changes over the last sixty-plus years and moves his story beyond Robinson the baseball player, opening a new, broader interpretation of an otherwise seemingly convenient narrative to show how Robinson's legacy ultimately should both challenge and inspire public memory. 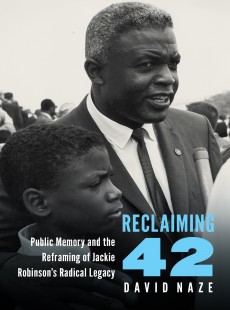 Public Memory and the Reframing of Jackie Robinson's Radical Legacy