In 1934 the republic of Haiti celebrated its 130th anniversary as an independent nation. In that year, too, another sort of Haitian independence occurred, as the United States ended nearly two decades of occupation. In the first comprehensive political history of postoccupation Haiti, Matthew Smith argues that the period from 1934 until the rise of dictator Francois "Papa Doc" Duvalier to the presidency in 1957 constituted modern Haiti's greatest moment of political promise.

Smith emphasizes the key role that radical groups, particularly Marxists and black nationalists, played in shaping contemporary Haitian history. These movements transformed Haiti's political culture, widened political discourse, and presented several ideological alternatives for the nation's future. They were doomed, however, by a combination of intense internal rivalries, pressures from both state authorities and the traditional elite class, and the harsh climate of U.S. anticommunism. Ultimately, the political activism of the era failed to set Haiti firmly on the path to a strong independent future. 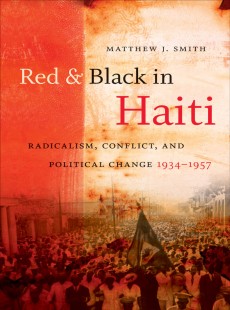 Red and Black in Haiti