Framed by theories of syncretism and revitalization, Religious Revitalization among the Kiowas examines changes in Kiowa belief and ritual in the final decades of the nineteenth century. During the height of the horse-and-bison culture, Kiowa beliefs were founded in the notion of daudau, a force permeating the universe that was accessible through vision quests. Following the end of the Southern Plains wars in 1875, the Kiowas were confined within the boundaries of the Kiowa-Comanche-Apache (Plains Apache) Reservation. As wards of the government, they witnessed the extinction of the bison herds, which led to the collapse of the Sun Dance by 1890. Though prophet movements in the 1880s had failed to restore the bison, other religions emerged to fill the void left by the loss of the Sun Dance. Kiowas now sought daudau through the Ghost Dance, Christianity, and the Peyote religion. Religious Revitalization among the Kiowas examines the historical and sociocultural conditions that spawned the new religions that arrived in Kiowa country at the end of the nineteenth century, as well as Native and non-Native reactions to them. A thorough examination of these sources reveals how resilient and adaptable the Kiowas were in the face of cultural genocide between 1883 and 1933. Although the prophet movements and the Ghost Dance were short-lived, Christianity and the Native American Church have persevered into the twenty-first century. Benjamin R. Kracht shows how Kiowa traditions and spirituality were amalgamated into the new religions, creating a distinctive Kiowa identity. 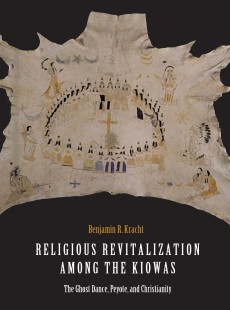 Religious Revitalization among the Kiowas

The Ghost Dance, Peyote, and Christianity