After the feverish mobilization of secession had faded, why did Southern men join the Confederate army? Kenneth Noe examines the motives and subsequent performance of "later enlisters." He offers a nuanced view of men who have often been cast as less patriotic and less committed to the cause, rekindling the debate over who these later enlistees were, why they joined, and why they stayed and fought.

Noe refutes the claim that later enlisters were more likely to desert or perform poorly in battle and reassesses the argument that they were less ideologically savvy than their counterparts who enlisted early in the conflict. He argues that kinship and neighborhood, not conscription, compelled these men to fight: they were determined to protect their families and property and were fueled by resentment over emancipation and pillaging and destruction by Union forces. But their age often combined with their duties to wear them down more quickly than younger men, making them less effective soldiers for a Confederate nation that desperately needed every able-bodied man it could muster.

Reluctant Rebels places the stories of individual soldiers in the larger context of the Confederate war effort and follows them from the initial optimism of enlistment through the weariness of battle and defeat. 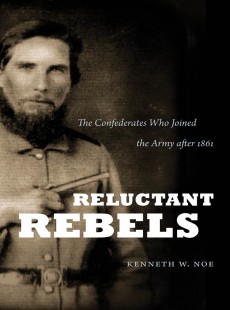 The Confederates Who Joined the Army after 1861