As early as 1865, survivors of the Civil War were acutely aware that people were purposefully shaping what would be remembered about the war and what would be omitted from the historical record. In Remembering the Civil War, Caroline E. Janney examines how the war generation--men and women, black and white, Unionists and Confederates--crafted and protected their memories of the nation's greatest conflict. Janney maintains that the participants never fully embraced the reconciliation so famously represented in handshakes across stone walls. Instead, both Union and Confederate veterans, and most especially their respective women's organizations, clung tenaciously to their own causes well into the twentieth century.
Janney explores the subtle yet important differences between reunion and reconciliation and argues that the Unionist and Emancipationist memories of the war never completely gave way to the story Confederates told. She challenges the idea that white northerners and southerners salved their war wounds through shared ideas about race and shows that debates about slavery often proved to be among the most powerful obstacles to reconciliation. 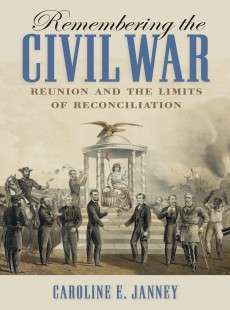 Reunion and the Limits of Reconciliation