An assessment of the ancient Greek city and its subsequent influence. A masterwork of political theory and comparative politics for the classroom.

"In a series of sketches touching on everything from the lust for honor to the suspicion of commerce and philosophy, from the role of homoerotic bonds in maintaining military formations to the distrust of technological innovation, Rahe brilliantly reminds us how utterly committed the Greeks were to a politics in which the distribution of honors, education and culture in all their forms, and economic activity were all designed to preserve civic solidarity.--Jack N. Rakove, American Historical Review

"[An] extraordinary book. . . . It is a great achievement and will stay as a landmark.--Patrick Leigh Fermor, The Spectator (London)

"A work of magisterial erudition.--Journal of American History 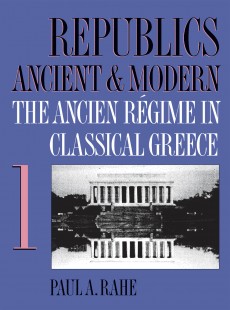 Republics Ancient and Modern, Volume I